*Disclaimer: I don’t claim to have knowledge nor expertise in boxing; this is merely a recounting of my experience last Sunday (23 November 2014) – my first time to watch a professional boxing match, no less the highly publicized bout between MANNY “Pacman” PACQUIAO, boxing’s only eight-division world champion versus World Boxing Organization (WBO) junior welterweight champion CHRIS ALGIERI

clueless at the ringside

To be honest, unlike most of my compatriots, I’ve never been a fan of Manny Pacquiao. He’s considered a hero where I come from, because of his inspiring rags-to-riches story – but this time, instead of a street smart instinct, he made it to the top thanks to raw athletic talent. Which is admirable in its own right. There’s no doubt about it, the man is a boxing legend. You only have to see his track record, or watch any of his past matches, to see he’s in a league of his own when it comes to the sport.

Finally, the Filipino people have something to be proud of. That’s probably a huge factor contributing to Pacquiao’s success. Because admittedly, there’s hardly anything else we excel at on an international scale. All BS aside, seriously, the most popular sport in the country is basketball thanks to a few decades of US occupation. BASKETBALL, the sport dictated by genetics (i.e. being tall). And how many Filipino people do you see over 6 feet?  After all our palpak (fail) moments, at least with Pacquiao we have a fighting chance…

It’s nice to be able to hope right…

So why wasn’t I a fan of Pacquiao? That’s probably the question you’re asking now. It’s because of his foray into politics. Here we go again, I thought. Another incompetent celebrity making a run for public office because they’re popular with the electorate. Same old story. Who cares about education, credentials, qualifications? The people wanna vote for their ‘idol.’

Look what happened with Erap (Joseph Ejercito Estrada, the action star who made it to the presidency and then got ousted for corruption) – he nearly won the presidency a second time in 2010. Disgraceful, it’s like we never learn. And I don’t think I’m the only one sick and tired of getting public servants who were voted in by the masses as if our elections were some kind of comedy TV game show.

The number of Pacquiao family members taking elective posts in Mindanao has led analysts to include them in the tally of political dynasties ruling the country. (Rappler)

3 Other Reasons for my misgivings against Pacquiao:

Pacquiao justified the vote by citing his devout Catholic faith (before he converted). This was castigated as hypocritical, especially given reports on his womanizing.

“God said, ‘Go out and multiply.’ He did not say, just have two or three kids,” [Pacquiao] said in an interview earlier this year with the Philippines’ GMA Network. (WSJ)

In 2009, Manny was included in Time Magazine’s list of the world’s most influential people. He also became the sixth Filipino to grace the cover of this magazine, after former Philippine presidents Manuel Quezon, Ramon Magsaysay, Ferdinand Marcos, Corazon Aquino, and Filipino actress and environmentalist, Chin Chin Gutierrez. (Filipiknow)

But this post is not about bashing Manny Pacquiao, who I still ultimately respect as a person and a sportsman. In fact having met him last month, my impression of him is of a kindhearted and soft spoken guy. Not exactly the sharpest tool in the shed, but maybe the one with the most impact!

Last weekend, you could almost feel the undercurrent of excitement and tension in Macau. In The Venetian/Cotai area, boxing fans were milling around leading up to the superstar sports event on Sunday morning. I even bumped into Chris Algieri and his team at breakfast in Cafe Deco Saturday morning (breakfast with The Venetian is not in-hotel but at either Cafe Deco or Fogo Samba. Choose Fogo Samba (the Brazilian churrascaria – they serve wood-fired meats even in the morning!) 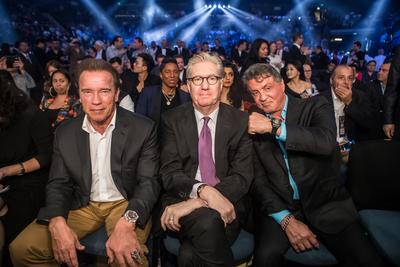 Even if I’m not into boxing, I swear the atmosphere was infectious. I came in after the latino undercard in which Jessie Vargas (US) defeated Antonio DeMarco (MX). I heard this one was a fun-to-watch, intense match. Vargas retained his WBA world super lightweight title.

The preliminary matches I did catch were apparently shit:

Chonlatarn Piriyapinyo, left, of Thailand gets a punch from Vasyl Lomachenko of Ukraine during their WBO world featherweight boxing title match

China’s Zou Shiming, right, lands a right to the head of Kwanpichit Onesongchaigym of Thailand (Inquirer)

A totally useless match. They weren’t even fighting for a title or anything… don’t know what this was for. It wasn’t even great. 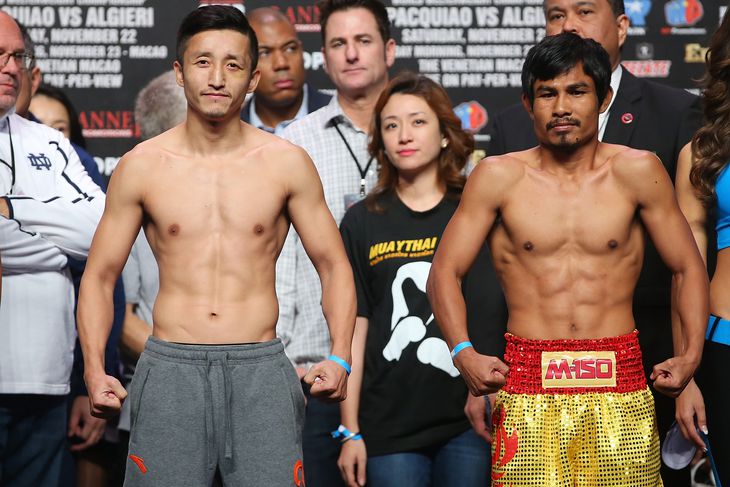 Boxing fans in Nueva Ecija province became anxious while watching the undercard fight in which Thai boxer Kwanpichit Onesongchaigym took a beating from China’s Zou Shiming. It took sometime for them to realize Onesongchaigym, who bore a striking resemblance to Pacquiao, was not their idol, and many gave out a hearty laugh. (Inquirer)

Manny Pacquiao – who had been training like a man possessed – outboxed, outsmarted and outpunched American Chris Algieri to easily retain his WBO world welterweight title at the Cotai Arena on Sunday. (SCMP)

All in all, I’ll have to admit it was a fun watch, an exciting once-in-a-lifetime experience, and I’m really glad I got to see Pacquiao fight and win before he retires.

This is another lesson in not saying no to new experiences, because you never know what you’ll gain from them! So here’s to being open minded and adventurous 🙂

Hope you enjoyed the read from a girl’s point of view.