Cycling in Hong Kong is a joy not very many expats or tourists seem to have discovered yet. Locals, on the other hand, absolutely love it, and not surprisingly so – especially since this particular network of cycle track is such a pleasure to do.

Where to rent a bike in Tai Wai:

I tried searching in other websites but to no avail – they wouldn’t give information on where exactly to rent a bike. So I’m posting this in an effort to be more helpful for those who want to start cycling from Tai Wai.

*Update: Some helpful information from a reader:

Cyclesport is another bike rental shop at Tai Wai, with various types of bike. They open till 11pm. You also can return the bike Tai Po or Tai Mei Tuk. https://www.facebook.com/CycleSportBikeRentalService 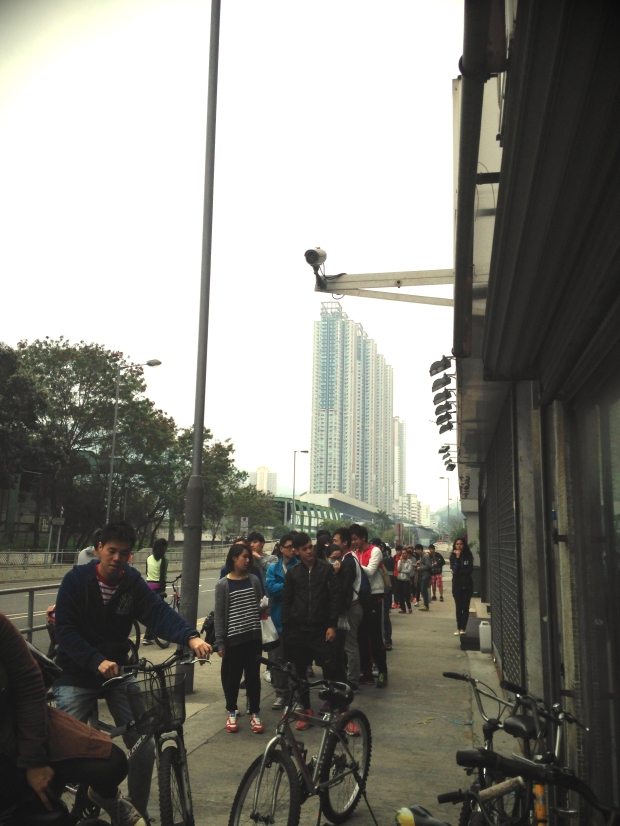 we were lucky to get ahead of the queue, which seemingly lengethened exponentially after we got in line

Although the more popular route is from Tai Wai to Tai Mei Tuk (Plover Cove), we decided to cycle to Ma On Shan that Sunday because we hadn’t done it yet. The Ma On Shan path is less busy, and more of just a peaceful ride as opposed to cycling on the other side of the river/harbour, where you will pass the race course, Science Park, university, market, etc.

All along the waterfronts (both sides of the river and harbour) are cycle tracks as well as promenades and jogging paths. In the future, these tracks will link  all the way around north to Fan Ling and Sheung Shui, circling west and back around to Tsuen Wan, forming a New Territories Cycle Track Network. Exciting stuff.

We began cycling along the Shing Mun River, passing the Hong Kong Heritage Museum (haven’t checked this out yet, need to see their Bruce Lee exhibition). There are parks all around this area, a great dose of urban greenery. The path then opens up into Tolo Harbour, giving one such an expanse of horizon to behold it feels like being let out of a cage.

Things we saw and did along the way:

the Ma On Shan promenade

taking a break at the Ma On Shan Promenade viewing deck

8 thoughts on “Cycling in Hong Kong: Tai Wai to Ma On Shan”